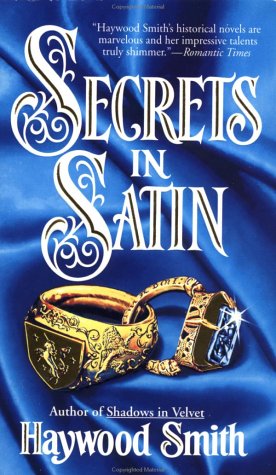 He thought she was as cold as ice.

With her pale face and black mourning gown, Elizabeth, Countess of Ravenwold, was completely emotionless as she stood over the body of her dead husband. But Edward Garrett, Viscount Creighton, had no idea of the passion behind her mask of ice– or the dark secrets hidden in her guarded heart.

She thought he was a careless rogue.

Garrett’s reputation preceded him, so Elizabeth hardened herself against his ruthless charms. But when a royal command forced her to marry the knave, their lives were drawn together into a dangerous game of intrigue…and a passionate contest of wills.

Amid the turmoil of a dying monarchy, Garrett and Elizabeth discovered a love haunted by the past and challenged by an uncertain future. But can this love survive, or will it be wrenched away by a twist of fate…or the hand of a king?

Royal Cavaliers and rebel Roundheads clash in Smith’s sweeping English Civil War novel (after Shadows in Velvet). Future King Charles II spitefully maneuvers the handsome warrior Garrett, Viscount Creighton, into marriage with widowed Elizabeth, Countess of Ravenwold. The two had taken each other in mutual dislike years before when she’d thought him a rake and a rogue; he thought of her as a frigid witch rejoicing in her husband’s demise. But it turns out that years of spousal abuse were responsible for Elizabeth’s icy demeanor and Garrett sets about thawing her through slow nurturing. But just as happiness seems within reach, illness, war and death threaten it. Smith delivers intelligent, sensitive but not saccharine historical romance for readers who expect more from the genre.

After seeing Elizabeth, Countess of Ravenwold, dance on the grave of her abusive husband, ladies’ man Edward Garrett, Viscount Creighton, is stunned when Charles I forces him into a loveless marriage with her. The Catholic widow has to overcome her physical and emotional scars while her Protestant husband fights a war of religious intolerance both on the battlefield and within himself. Filled with conflict and adventure and a cleverly woven historical background, this is a tale of intrigue full of sympathetic characters and ending satisfactorily. Smith is a winner of the prestigious Maggie Award, and her Shadows on Velvet (St. Martin’s, 1996) is a 1997 Rita finalist for best first book. She lives in Buford, Georgia.

Elizabeth, Countess Ravenwold, had endured nearly all she could from her husband. When he died, the fetters of a painful marriage provided a sense of relief that no one but those closest to her would understand. To Viscount Creighton, she appeared the very essence of winter — a cold, unfeeling woman who would dance on her husband’s grave. When circumstances beyond their control — mainly the exiled Prince and a well-meaning Marquis — find them married to each other, only chaos will follow. Of this they are both sure. Elizabeth, a devout Catholic, cannot abide Garrett’s sarcastic humor. Garrett, in turn, can hardly see past the guise of black in which Elizabeth shrouds herself. But hard times are upon them. As dutiful Royalists, they must make the best of the situation because Garrett has been charged with a great responsibility to the Prince. If they are caught, Cromwell will very well hang them. Through the nights in the moors, facing the violent Gubbings, battling disease and family crisis — Elizabeth and Garrett will find that family and love can be as binding as the marriage contract they reluctantly signed. As they face their uncertain future, it may be that facing it together they will find the strength and courage to live as one, instead of constantly attacking each other. These are powerfully aggressive characters with a radiance that will cause your heart to swell. With their pain and pleasure, Haywood Smith creates a beautiful story, not only of romance, but of determination and emotion. Haywood Smith brings us a beautiful tale of faith, strength, and empowering love. It is apparent in her style that Haywood cares deeply for her people for she gives them a vibrancy that rings out every time the hero or heroine speaks. In truth, Secrets in Satin will touch your heart and grip your imagination.This story races along at a speed that will cause your heart to skip a beat. Entrancing and amazing! Just sit back and let Haywood draw the world of 17th century England around you. With images as powerful as Cromwell himself. Gripping! I had to keep sneaking around at work to finish it. Just couldn’t put it down!Karen Ellington — Copyright © 1994-97 Literary Times, Inc. All rights reserved.