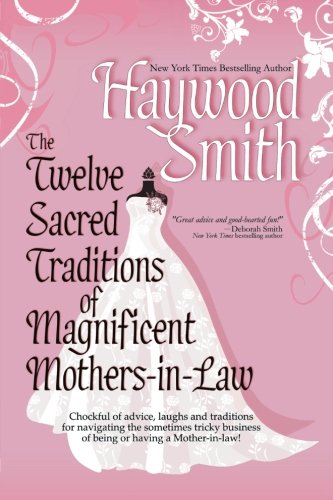 Dear Mothers-in-Law: Be honest, kind, fair, realistic and, above all, learn the fine art of biting your tongue.

Bestselling author Haywood Smith and her pals have lots of personal experience in the joys, sorrows, pitfalls and flat-out hysteria of Mother-in-Lawness. Now Smith offers a handy and fun booklet of pithy advice to mothers-in-law everywhere. Smiths sassy observations and gentle wisdom are delivered with her trademark southern charm, packing the sweet, heady punch of bourbon ice cubes melting in a mint julep.

The Twelve Sacred Traditions of Magnificent Mothers-in-Law is the perfect gift book for showers, engagement parties, family celebrations or just to share with that special DIL (Daughter-in-Law) or SIL (Son-in-Law). It can even safely be given to a Mother-in-Law.

We, the official and unofficial members of Mothers-in-law Anonymous, in order to form a more perfect union with our married children and their spouses, to establish tolerance, insure domestic tranquility, disprove all those bad-mother-in-law jokes, promote the general welfare, and secure the blessings of our sons- and daughters-in-law, do ordain and establish these Twelve Sacred Traditions for Magnificent Mothers-in-law for ourselves and our posterity.

No animals were injured in the production of these traditions, but an entire tray of sandwiches from Henri’s Bakery and a jumbo jug of sunny rosé were consumed, followed by a box of éclairs and some really nice Kona coffee.

In the interest of flow and brevity, we’ve used the term DILs (daughters-in-law) to designate our children’s spouses or significant others, but all traditions apply equally to SILs (sons-in-law).  And FILs (fathers-in-law) as well as MILs (mothers-in-law).  If that’s confusing, turn off the TV, your cell phone, and your video game, then reread this paragraph at least four times.  We’re never too old to learn.

We love our children, yes we do—even if we don’t like them.  But once those children are married, Magnificent MILs realize that we must officially retire when it comes to directing their lives.  This is as it should be, and not quite the sacrifice you might think.  Retired people still have all their skills; they just don’t have to go to work anymore.  When specifically requested, though, they can still do consulting.

It’s the same with rearing our kids.  The minute the justice of the peace or the clergyman or the shaman says, “I now pronounce you,” our motherly molding-and-shaping skills go pouf! and transform instantaneously into—gasp—meddling and nagging.

Magnificent MILs understand this and move on.

It’s imperative that we stop trying to tell them what to do when they haven’t asked for our advice.  Though we have our children’s best interests at heart, any unsolicited advice (the key word being unsolicited) qualifies as interference.  We have to let go, scary as that is.

Even when a cherished son has married an emaciated pincushion of a DIL (daughter-in-law) who has a tongue stud and maroon hair, and was introduced by her roommate’s cocaine dealer.

Or when a precious daughter (shudder) goes starry-eyed at the prospect of becoming bride number three for her father’s alcoholic best friend.

Even if they lease a gas-guzzling SUV for five years, with only ten thousand miles a year allotted.

Even if they use the money they saved by getting food stamps to go on a Caribbean cruise.

Even when they “mark their bodies like the heathens” and/or get assorted metal objects inserted into their anatomies.

Even when they work all the time and live in a small apartment, but get a Great Dane puppy anyway, then don’t have time to train it properly.  (We are not, however, required to do it for them, or to dog sit.)

Even when they decide to go to the other in-laws’ for Christmas.  (Choke.  Sob.)

The exception that proves the rule:  The one time this rule doesn’t apply is when there might be abuse involved.  A Magnificent MIL never turns a blind eye to evidence that indicates abuse, even if it points to her own child.  If a MIL has good reason to suspect this serious problem in any form, she won’t share her suspicions with anybody until she’s consulted with a local shelter or agency to get solid information about the best course of action.

Tempting though it may be if the SIL is suspected of abuse, Magnificent MILs do not take the law into their own hands.

If any man ever beat my daughter, I’d want to grab my granddaddy’s shotgun and do some rough justice, then and there.  Wanting to do that is normal.  Doing it isn’t.

This is America, and people are innocent till convicted by a court of law, even if we catch them in the act.

That doesn’t stop Magnificent MILs from creative problem solving.   I know of a MIL who responded to her abused daughter’s frantic call for help by calling 911, only to be told the police would be thirty minutes getting to her daughter’s house.  Frantic, she raced over there to find her child bruised and bleeding, and the drunk, abusive husband passed out on the kitchen floor, stark naked except for a dish towel placed over his privates by her daughter.

Lacking any rope to tie him with, this enterprising MIL drizzled most of a six-pack of instant glue onto the seat and back of a sturdy wooden kitchen chair.  With her daughter’s help, she hoisted the louse into the chair, covered his privates with the lightly glued dishtowel, then held him tightly against the chair till the glue set up.  Just to make sure he couldn’t do any further damage before the police got there, she pulled his hands behind the back of the chair and neatly glued his palms and fingers together as if in prayer, but aimed in a direction more appropriate to his bad behavior.

To spare the terrified children from seeing their father that way, she gagged him loosely with a pair of Sunset Tan pantyhose, then draped a clean king-sized sheet over him, thereby earning the Betty Crocker Seal of Approval.

She then tended to her daughter and helped pack up the children and belongings.

Personally, I call that just plain elegant, proof that the crassest of components can make up a deliciously delicate whole.  From what I hear, the police, who didn’t get there till an hour after her call, thought so, too.

The only trouble was, the chair wouldn’t fit into the squad car, so they had to send for a paddy wagon.

The arraignment in Cobb County night court is now a legend.